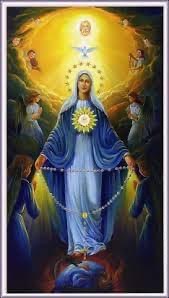 The Power of One Hail Mary continued…….

Once Our Lord asked St. Francis Assisi to give Him something. The Saint replied: “Dear Lord, I can give You nothing for I have already given you all, all my love.”

Jesus smiled and said: “Francis, give Me it all again and again, it will give Me the same pleasure.”So with our dearest Mother, she accepts from us each time we say the Hail Mary the joys and delight she received from the words of St. Gabriel.

Mary is truly and really our Mother. As children when in trouble run to their mothers for help, so ought we to run at once with unbounded confidence to Mary.

St. Bernard and many Saints said that it was never, never heard at any time or in any place that Mary refused to hear the prayers of her children on earth.

Why do we not realize this most consoling truth? Why refuse the love and consolation that God’s Sweet Mother is offering us?Is it our lamentable ignorance which deprives us of such help and consolation.To love and trust Mary is to be happy on earth now and afterwards to be happy in Heaven.

Dr. Hugh Lammer was a staunch Protestant, with strong prejudices against the Catholic Church. One day he found an explanation of the Hail Mary and read it. He was so charmed with it that he began to say it daily. Insensibly all his anti-Catholic animosity began to disappear. He became a Catholic, a holy priest and a professor of Catholic Theology in Breslau.

A priest was called to the bedside of a man who was dying in despair because of his sins. Yet he refused obstinately to go to confession. As a last recourse the priest asked him to say at least the Hail Mary after which the poor man made a sincere confession and died a holy death.

In England, a parish priest was asked to go and see a Protestant lady who was gravely ill, and who wished to become a Catholic. Asked if she had ever gone to a Catholic Church, or, if she had spoken to Catholics, or if she had read Catholic books? She replied, “No, no.” All she could remember was that——when a child——she had learned from a little Catholic neighbor girl the Hail Mary, which she said every night. She was Baptized and before dying had the happiness of seeing her husband and children Baptized.

St. Gertrude tells us in her book, “Revelations” that when we thank God for the graces He has given to any Saint, we get a great share of those particular graces.What graces, then, do we not receive when we say the Hail Mary while thanking God for all the unspeakable graces He has given His Blessed Mother?” (ourladyswarriors.org)