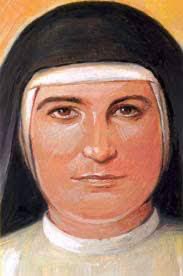 Today saint, Blessed Magdalena Caterina Morano, learned to love the rosary in the midst of her family. The family that prays together stays together, and for Magdalen, who experienced the loss of her father, sister and five brothers, by the time she was eight years old, it was the rosary that kept her mother and last living sibling united with the family members who had passed.

At eight, Magdalena became the sole breadwinner of the little family and in this her reliance on Our Lady became absolute. Working and studying she qualified and became a teacher at 14. She loved being a teacher but more than anything she wanted to teach the children in her class about God as a nun. But she had to wait almost 20 years until she was 33. By then she had saved enough to buy her mother a house.

Entering the convent, she prayed for the grace,““of staying alive until she had become a saint.” Though she had longed for the religious formation of a convent, the reality was that through daily Mass, Rosary, fidelity to duty and sacrificially frugal living she had been formed in sanctity in the School of Mary.

Her achievements as a consecrated nun and catechist are impressive, and her guidance for the sisters in the many convents and schools she founded, are still followed today. She advised that when undertaking anything give “one glance to earth and ten to heaven,” (referring to reliance on the rosary). She told her sisters that “that holiness is all about doing God’s will, this being the only way to show our love for Him.”

A favourite song of hers was “Long live Mary, may Mary always be alive. Long live Mary and the One who created her, for without Mary you cannot be saved.”