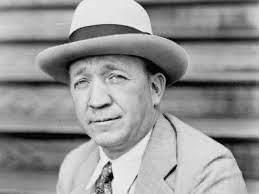 Knute Rockne started coaching the same year Our Lady appeared in Fatima. He was a skilled athlete, creative and a “rosary man,” which proved to be a dynamic combination.

In his 13 years of coaching, he brought college football to a whole new level and put Notre Dame College football on the map. He tried many new techniques to pass, kick and run, worked not just on the physical abilities of his players, but also worked to build character. Prayer before practice and games and importantly after games win or lose was a given.

“Knute Rockne is considered by most authorities as the greatest innovative football coach in history. He coached at the University of Notre Dame for thirteen years.

On March 31, 1931, Rockne was on Transcontinental and Western Airways (TWA) Flight 599 from Kansas City, Missouri to Los Angeles, California. The plane’s right wing snapped off and all eight passengers were killed in the ensuing crash.

When they found Rockne’s body in his cold dead right hand he was holding his personal Rosary Beads and Cross.” (Tapper’s Collection)

P.S. There will be Mens’ Rosaries of Reparation happening around the country this coming Saturday. Also praying for peace in Ukraine and our troubled world.

Cork – 2pm at the Grand Parade

Dublin – 2pm at North Earl St (by the Spire)

Kilkenny – 1pm at St James’ Green (next to the Cathedral)

Knock – 1pm at the Plaza

Letterkenny – Market Square (next to BOI) at 1pm

Lisburn – beside the Linenhall Centre at 1pm

Tralee – 1pm at the Square