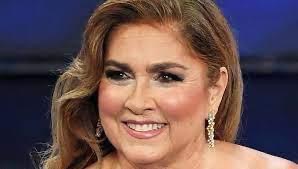 In a terrible tragedy, in 1994, her oldest daughter disappeared at the age of 23. She has never been found.The singer’s family, half of Mexican origin on her mother’s side, was devoted to Our Lady of Guadalupe.

The singers says that she felt close to Mary at that traumatic time. “I turned to Our Lady. I was lost and couldn’t find complete answers anywhere. I couldn’t even sleep. So I went to a monastery in New Orleans and asked them if they had a rosary. They pointed to a large stack of colorful plastic rosaries. I picked one out.

Reciting it, then, I finally found peace that would allow me to sleep, as well as the certainty that, in the end, all will be well. That good overcomes evil. All the time.”Thanks to rediscovering inner peace, Romina was able to resume the path of her life.

Romina Power is also a painter, and on multiple occasions she has painted the Blessed Mother, always with the Child Jesus: “There was a period when I painted only Madonnas,” she told the Italian weekly, driven by “that sense of peace and serenity that she instills.”

She describes to the reporter how she portrays her:I wanted her sweetness to shine. But also her resignation to her destiny, the destiny of her son. I feel her as the Mother of all of us, not only of Jesus. And who loves her children and listens to them more than a mother does? She doesn’t know Pope Francis well, but she had a special bond with St. John Paul II, as she revealed in the interview:

Fifteen years before I met him personally, I dreamed of walking and talking with him. He gave me Communion three times. When I approached him on the stage of the Maracana stadium and, according to protocol, bent down to kiss his ring, he took my head and kissed me on the forehead instead. (From an article by Silvia Lucchetti )