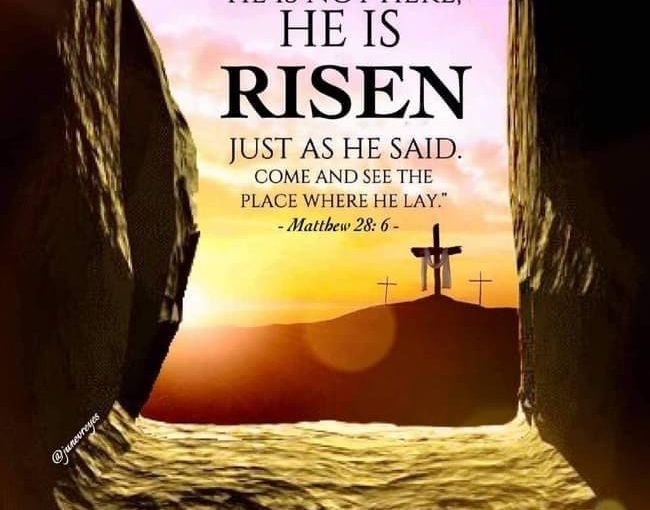 Points to consider when meditation on the First of the Glorious Mysteries of the Rosary.

This is the greatest of the miracles of Jesus.

Jesus was laid in a borrowed tomb. The tomb belonged to Joseph of Arimethea. The body of Jesus was hastily placed there without the usual burial ceremony because the Sabbath was drawing near.His body was wrapped in Linen and anointed with some spices.

Then a large rock was rolled in front of the tomb.The enemies of Jesus and the High Priests went to Pilate. Knowing that Jesus promised to rise from the dead on the third day, they asked that guards be placed at the tomb in case the followers of Jesus came and stole His body in order to fool people into believing that He did in fact rise from the dead.

Pilate did as they asked.And so a guard was sent and secured the tomb.After the Sabbath the Holy Women went to the tomb so they could finish anointing Jesus’ body.

But, Jesus had already rose.There was an earthquake and an angel came down from heaven, rolled back the stone, and sat upon it. The guards were so frightened they ran away in fear.

Mary Magdalen was the first person to the tomb. She cried out in sorrow when she saw that Jesus’ body was missing for she thought it had been stolen.Mary Magdalen ran to Peter and John. She cried, “They have taken away the Lord out of the sepulchre, and we know not where they have laid him.” -John 20:2

Peter and John ran to the tomb to see for themselves. John, being much younger, outran Peter and arrived first.When Peter arrived he entered the tomb. There he saw that the linens that Jesus’ was wrapped in were on the floor but that the cloth that covered Jesus’ face was folded neatly and placed somewhere separate from the other linens.

At that moment they both believed that Jesus had risen as He said He would.Meanwhile, Mary Magdalen remained outside the tomb, crying. Two angels appeared to her and asked her why she was sad.She answered…”Because they have taken away my Lord; and I know not where they have laid him.” -John 20:13

She turned around and saw Jesus standing there yet she did not recognize Him.He asked her…”Why weepest thou? whom seekest thou? She, thinking it was the gardener, saith to him: Sir, if thou hast taken him hence, tell me where thou hast laid him, and I will take him away. Jesus saith to her: Mary. She turning, saith to him: Rabboni [which is to say, Master].

She went back to the other disciples and proclaimed, “I have seen the Lord.” But they did not believe her.The other woman later arrived at the tomb.Upon entering they saw an angel sitting inside. He told them Jesus had risen.

Delighted, they ran back to tell the others. On the way they met a man clothed in white.He told them…”Be not affrighted; you seek Jesus of Nazareth, who was crucified: he is risen, he is not here, behold the place where they laid him. But go, tell his disciples and Peter that he goeth before you into Galilee; there you shall see him, as he told you.” -Mark 16:2-7