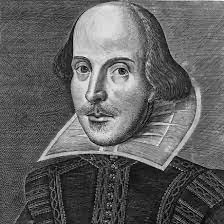 Today is the birthday of William Shakespeare. A fascinating debate surrounds him to this day. “Was Shakespeare, a nominal Anglican really a secret Catholic”

It is not hard to find a “shadow play” within each of his plays that would seem to be speaking to the persecuted Catholics of his time.

Even more interesting is the thesis that his sonnets, though secular, are patterned after the rosary. The word “rose” is prominent in his poems. There are 153 sonnets (154 counting a second variation of one of them) as there were 153 Aves/Hail Marys in the Rosary at the time. Even more intriguing is that to some extent the sonnets are roughly grouped in tens/decades and at times seem, in a secular way, to mirror the rosary mystery in particular and generally, follow the pattern of Joyful, Sorrowful and Glorious.

The debate of whether or not Shakespeare was Catholic will not be settled this side of heaven but remember Shakespeare in your rosary today please.