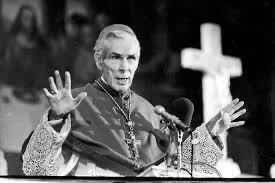 He was coming up to the fifth anniversary of his priestly ordination, and he decided he would go to see the Blessed Mother in Lourdes.

He had just about enough money to make the 24 hour train journey, but he didn’t have enough money for a hotel, food, or to get back. So he decided to leave that all up to the Blessed Mother. When he arrived in Lourdes he stayed in a hotel for nine days. He said he would make a nine day novena of prayer.

On the morning of day nine, nothing had happened in relation to his hotel bill, and by the afternoon, and then the evening nothing had still happened. He decided to go to the grotto to pray. When he was there a man came up to him and asked him if he was an American Priest. He said he was. He then asked him if he could speak French, and he said he could. The man then asked him if he would accompany him and his family to Paris and show them around, and Fulton Sheen smiling said he would.

Then on their way back, the man asked him a very important question. He said “have you paid your hotel bill yet? Fulton Sheen smiled and said he hadn’t. Our Lady took care of everything.

P.S. The Men’s Rosary is really growing thank God. Here is a wee video from Cork