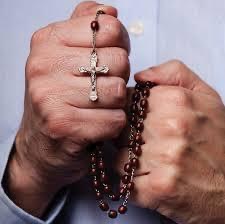 “Father Dominic, a Carthusian, who was deeply devoted to the holy Rosary, had a vision in which he saw heaven opened and the whole heavenly court assembled in magnificent array. He heard them sing the Rosary in an enchanting melody, and each decade was in honour of a mystery of the life, passion, or glory of Jesus Christ and his holy Mother.

Fr. Dominic noticed that whenever they pronounced the holy name of Mary they bowed their heads, and at the name of Jesus they genuflected and gave thanks to God for the great good he had wrought in heaven and on earth through the holy Rosary. He also saw our Lady and the Saints present to God the Rosaries which the Confraternity members say here on earth. He noticed too that they were praying for those who practice this devotion.

He also saw beautiful crowns without number, which were made of sweet-smelling flowers, for those who say the Rosary devoutly. He learned that by every Rosary that they say they make a crown for themselves which they will be able to wear in heaven. This holy Carthusian’s vision is very much like that which the Beloved Disciple had, in which he saw a great multitude of angels and saints, who continually praised and blessed Jesus Christ for all that he had done and suffered on earth for our salvation.”

The Blessed Virgin Mary is a gift from God as St. Louis de Montfort said in his book, True Devotion to Mary:“God the Father made an assemblage of all the waters and He named it the sea (mare). He made an assemblage of all His graces and he called it Mary (Maria). This great God has a most rich treasury in which He has laid up all that He has of beauty and splendour, or rarity and preciousness, including even His own Son: and this immense treasury is none other than Mary, whom the saints have named the Treasure of the Lord, out of whose plenitude all men are made rich.” (The Secret of the Rosary)