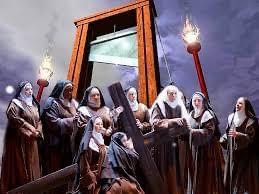 Today is the feast of the Martyrs of Compeigne.

During the French Revolution, convents were disbanded and religious habits illegal as was religious life.  When the Revolutionaries disbanded the Carmelite convent of Compiegne the 30 nuns took refuge in four different houses, continuing their routine of prayer: The Divine Office, the Rosary, etc. conscious of the need to console their Divine Spouse amidst the violence and hatred of Him that surrounded them.

Before sending off the small bands of nuns, the Mother Prioress asked them to prepare for execution.  When the nuns “criminal activity” of prayer was discovered, the 16 nuns that were found by the revolutionaries were taken to Paris. After a mock trial they were loaded into a cart and taken to the guillotine.

The journey took two hours through narrow streets blocked by jeering crowds. The sisters continued their routine of prayer, singing the Office, praying the rosary and the Church’s special prayers for the dying. They were finishing the rosary as they arrived at the place of execution. Singing the Salve Regina, they were roughly pulled from the cart.

As each nun got to the top of the ladder, she knelt before the Prioress asking permission to die, Then rising, the sister renewed her vows before laying her head on the block. The remaining nuns intoned a hymn of thanksgiving until the Prioress was alone, renewing her vows she finished the hymn and died.

A hush came over the mob which for three years had howled with glee at the continuous blood shed. People began to disperse slinking away in deep shame.  Today historians point to the execution of Robespierre, a revolutionary leader as the reason the Reign of Terror came to an end. But contemporary writers were convinced it was the prayerful witness of the 16 nuns that stopped this great evil.