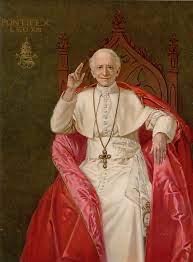 Pope Leo XIII who died 81 years ago today is called “The Pope of the Rosary”.

Pope Leo XIII was very open to private revelation. He promoted the Brown Scapular, instituted the Feast of Our Lady of the Miraculous Medal, wrote an apostolic letter promoting pilgrimages to Marian shrines, especially Lourdes, and received the visionary of La Salette, Mélanie Calvat, in two separate private audiences. He so loved Lourdes that he commissioned the construction of a Lourdes Grotto in the Vatican Gardens. Following the thought of St. Bernard of Clairvaux, he taught that a Christian trying to live their faith without Mary is comparable to a bird trying to fly without wings. In his many Marian writings, he emphasized that it is Our Lady who is capable of bringing about obedience to the Vicar of Christ among all Christians. He was the first pope to have his voice recorded; on the recording, he’s singing the Hail Mary.

Pope Leo XIII wrote an incredible 11 encyclicals on the rosary, promulgated numerous apostolic letters on the rosary, and gave countless messages on the rosary to various dioceses and religious institutes. …He tirelessly taught that the rosary was the most effective means of expanding the kingdom of Jesus Christ in the world and was of benefit to both individuals and society at large. He encouraged everyone to pray the rosary every day, and especially encouraged priests and missionaries to preach the rosary, since it has the power to expel evil and heal the sores of the human heart.

Pope Leo XIII dedicated the month of October to the rosary, granted many indulgences to the rosary, approved a comprehensive list of the indulgences attached to the rosary, supported the construction of the Basilica of the Rosary in Lourdes, inserted the title “Queen of the Most Holy Rosary” into the Litany of Loreto, wrote a charter for the Confraternity of the Rosary, encouraged the Dominicans to promote the rosary, and supported the rosary apostolate of Blessed Bartolo Longo at the Basilica of the Rosary in Pompeii. Even a shortened version of his famous Prayer to St. Michael the Archangel is now commonly prayed at the end of the rosary. The writings of Pope Leo XIII highlighted a special blessing: To pray the rosary is to pray with the holy angels, since it was the Archangel Gabriel who uttered the first Ave. Pope Leo XIII will forever be the pope of the rosary.” (Fr Don Calloway)