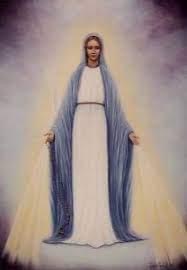 Today is the Feast of Our Lady of Safety. When Germany took over Holland in WWII, many young Dutchmen had to go into hiding. Many, often up to 200 at a time, found refuge in Overloon.

The source of the exceptional generosity of the villagers was the family rosary in every home in this small Catholic and deeply Marian community. During the years of the occupation, the most pressing intention of these rosaries was peace and the safety of the villagers and their guests. The hidden men made a vow to their Heavenly Mother to return to Overloon after the war to thank her publicly for the thousands of daily maternal miracles that preserved their lives even in the battle of Overloon at the end of the war.

In 1954, the promise was kept. A statue was commissioned and erected in Overloon. At the blessing ceremony the surviving men and villagers were reunited one last time in the rosary. This time it was a rosary of thanksgiving for peace and protection.