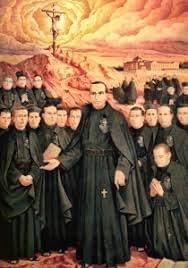 Today is one of the day the Church selected to honour some of the martyrs of the Spanish Civil War.

Today’s martyrs were executed in 1936 for the crime of being nuns and priests and for refusing to give up their vocation. It is a fact of history that two groups of Irish men voluntarily travelled to Spain to take part in the Spanish Civil War.

One group, the International Brigade organised by the Communist Party of Ireland fought for the Communist Spanish Republic. The other group, the Irish Brigade, fought on the side of the Nationalists. At the time the difference was clear.

Over the years Ireland has changed. The International Brigade is eulogised in song and have become heroes. The Irish Brigade are forgotten. “The Spanish Civil War is now remembered in Ireland as a conflict between democracy and fascism rather than Christianity and communism.

As a result, the veterans of the International Brigades have gradually come to be regarded as heroes, while the Irish Brigade’s crusaders have been forgotten or are reviled as supporters of fascism. Such are the vagaries of history.”(Fergal McGarry)

But no rosary is forgotten, not by Our Lady who gathered each rosary as a rose offered by the Spanish and Irish and places them forever before the throne of the Most Blessed Trinity.

P.S. Episode 2 of THE TOTUS TUUS SHOW is now out. Hope you enjoy it!
https://youtu.be/Vm9eaD-exzI