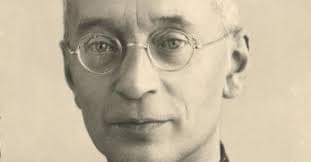 Today is the feast of Blessed Titus Bradsma, who died a Carmelite martyr in Dachau concentration camp.

Titus Brandsma’s rosary which was always on his person and often in his hands is now kept on display in Blessed Titus Brandsma Church in the Netherlands.Blessed Titus had been selected for extermination by the Nazi’s for his work in warning Holland about the dangers of Nazism and more immediately for his priestly ministry among his fellow prisoners.

During his time in the infirmary he was used for experimentation.In her testimony the infirmary nurse , who called herself “Titia” said “ I was in Dachau from April till October, 1942. There I got to know Father Titus a week before his death. I was a nurse in the infirmary.

I visited him twice a day. Fourteen or 15 times I spoke with him briefly, about 10 minutes each time.” “When I was 16 years old I went to Berlin as a nurse of the Red Cross. There we had to swear an oath that we viewed Hitler as our god and we had to confirm that we would never go to church. The church and all else was only deceit. The Jews would have to be completely exterminated. That was the start of our training.

“I sensed immediately that he felt very sorry for me… Once he took me by the hand and said “What a poor girl you are. I pray for you a lot.”… “He gave me his rosary, as well, to allow me to pray. I answered him that I was unable to pray and therefore did not need it. He told me that although I did not know how to pray, I could at least recite the second part of the Hail Mary: ‘Pray for us sinners.’ I started laughing then. He told me that, if I were to pray a lot, I would not be lost.”

Another time I told him about the Polish priests, who secretly offered Holy Mass during the morning. I said that the majority of the priests were good for nothing. He answered with a word from St. Theresa, that it is not necessarily the best priests who deliver the most beautiful sermons from the pulpit, but the best priests are those who have to suffer much and who offer their suffering for the sinners. He added that he was content to be able to suffer.” …“One time he was taken along for an experiment and, in spite of the fact that he had a suspicion what it was all about, he remained friendly and retained his good mood. I remember that he said at that moment: ‘Your will be done, not mine.’ These words impressed me a good deal. At this experiment, which Titus was subjected to, I was personally present. I have the impression that he was unable to offer resistance and he felt deeply unhappy, yet he never mentioned it again.” “He was always cheerful. …Whoever had seen him would come away with the impression that there was something supernatural about him.” “A great majority of the ill prisoners were only concerned about themselves and only thought about themselves, but Titus was always in a good frame of mind and was a support for everyone and, in a special way, for me.” ( from the beatification process testimony).

When the appointed execution day came, this nurse approached Fr Titus to give him the poisoned “Mercy Injection”. Though he was aware of what was happening, he spoke kindly to her, blessing her. The nurse did not forget her time with Fr Bandsma. She kept the rosary with her and slowly through his prayers began to pray eventually return to the Catholic Faith of her childhood. She testified at his cause for beatification and sacrificed her most precious treasure, the Rosary, to the Carmelites in 1954.