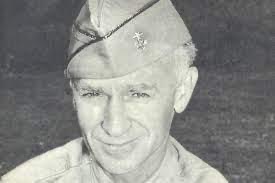 Ernie Pyle was a dearly loved war correspondent who lived with the soldiers on the many battle fronts of WWII . He brought the soldiers in photos and stories to homes across America.

The rosary sometimes makes an appearance in his work. For example the photo of Private Henry Rourke showing his rosary and doing his best to explain it to a wounded Japanese soldier. And this paragraph, “Despite the overwhelming feeling about all the gear he had to carry, Nick Merlo made sure there was a special place for his good luck rosary. ‘I never left that anywhere’ …

So devout was Merlo that he opted to spend his time in the chapel instead of joining the card games. ‘That was where me and my rosary felt the best’ Merlo said.”