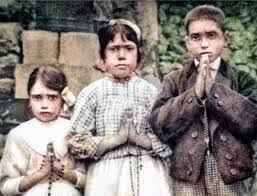 When Lucia, Francisco and Jacinta were walking to the Cova da Ira for the August apparition of Our Lady, they were kidnapped by the administrator of the district.

He was an atheist and thought he would stop what he thought was a primitive event. He assumed that with the use of bribery or fear he would be able to extract denials of the apparitions from the three children.

Many of the 20,000 people who came to Fatima that day saw a bright cloud descend on the holm oak but then ascend again from where it had come.

Trapping the children and preventing the apparition must have felt like a victory to the administrator though the children’s faith and willingness to even die in defense of the truth of the apparitions defeated him. Instead of the denials he sought he wound up with all the prisoners in his jail praying the rosary with the children.In light of this, it is interesting that this same day August 13th has been associated with other major events in the spiritual battle of our times.

In 1927, ten years to the day, Fidel Castro was born. Castro would turn Cuba into a Communist state and ban religious practice.

August 13 1941 The Manhattan Project began which resulted in the development of the Atomic Bomb.

August 13, 2012, Helen Gurley Brown editor of Cosmopolitian died and is lavishly honoured for her success at changing the attitude of young American woman especially in the areas of marriage and family, chastity and motherhood encouraging divorce, promiscuity, contraception and abortion.