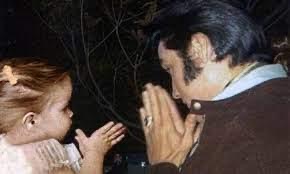 Today is the 45th anniversary of the death of Elvis Presley.

“His song “Miracle of the Rosary” is not one of his most famous songs, but it is an interesting and mysterious one. Elvis, who was baptized within an Evangelical Christian community, was no stranger to Christian music. He released several albums of Gospel music, with tunes like: “He Touched Me,” “Amazing Grace,” and “How Great Thou Art.” Still, it seems strange that a Protestant would record a song about the Rosary.

Domincana Journal tells the story of how “Miracle of the Rosary” came to be. It was written by Presley’s long time friend, Lee Denson. Lee was the son of Rev. James Denson, who ran the Poplar Street Mission, a Pentecostal church, which the Presley family attended after moving to Memphis in 1948. Lee is the one who taught Elvis to play the guitar when he was 13.

In 1960, Denson wrote an English version of “Ave Maria,” which his publisher had no interest in. Remembering his friend Elvis’ love of Gospel music he dropped in and played it for “The King.” Elvis enjoyed the tune, but nothing ever came of it. Then, over a decade later, Presley surprised Denson with a recording of “Miracle of the Rosary” for his 1972 album, Elvis Now.

“Miracle of the Rosary” is truly miraculous in its own way, in the fact that it was published at all. Doubly so that it was recorded by Elvis – the only song about the Rosary to ever be recorded by a major artist and released on a major label. It is also a bit of a miracle Elvis remembered it for over a decade, after hearing it only once. And it is miraculous and mysterious that two Pentecostal boys felt called to record a song about one of the most sacred Catholic devotions and sacramentals.”