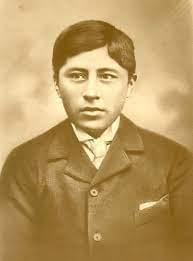 Zepherin Namuncura’s father was a tribal chieftain in Argentina. His father sought to lead his people to the faith of the one true God. Providentially his mother’s name was Rosario and his love of the Blessed Virgin and her rosary would be a defining devotion of his short life.

His father hoped that Zepherin would grow up to be a leader of his people and so he was sent to be educated by the Salesians. He grew in virtue and worked hard at his studies though being the only native Indian student he sometimes bore the brunt of boyish pranks.

As a new Salesian seminarian, he organised a rosary procession in honour of Our Lady of Mercy. The next day he was coughing blood and was diagnosed with Tuberculosis. He offered himself for the conversion of his people.

For almost two years “he bore his cross of suffering heroically, constantly praying the Rosary for his people.” He was 18 when he died surrounded by several of his Salesian brothers praying the rosary.

Fulfilling his father’s dream, Blessed Zepherin became a model and leader of his people.