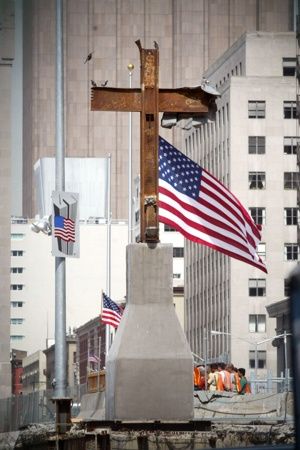 The feast of the Exaltation of the Holy Cross we celebrate the victory over death and fear of the Crucifixion in this picture we are reminded so soon after 9/11 of the sacrifices of modern day firefighters and servicemen that went up to rescue those caught in the wreckage at the top of the towers and in our modern world that has forgotten God. In the endless concrete jungle of tv ads And all sorts of modern creations of mankind, buildings to house financial trade of the global banks and stock markets and other man made contraptions of modern commerce.and in the collapse. When it all fell to ruin. (And the day to day routines were forgotten about) in the wake of the horrendous destruction there was one cross formed of metal beams at the foot of the building. Some may argue it was a random chance others may but the resemblance is to true to be that. Here is an image .a sign that only God could left there in the rubble