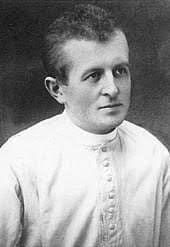 From childhood, Blessed James Kern, whose feast is today, loved the sound of his mother praying the rosary.

By the time he was in school, he had taken up the practice of the daily rosary. This would be the foundation of his prayer life to which as he grew he added daily Mass and Eucharistic Adoration.

By the age of 14, he understood that “that real love expresses itself in renunciation and sacrifice.’

He took a vow of virginity in preparation for a vocation to the priesthood. At 18, he was in the army, and a further vocation to reparation, and he offered himself as sacrifice for others.

James asked Jesus to give him a share in His crucifixion. Shortly after he was shot and suffered a chest wound that never healed. He understood this wound which caused him great pain as the answer to his prayer.

Discharged from the army, he entered seminary. This was the same year that the children of Fatima were told of the need for reparation by Our Lady. His years of seminary and priesthood were marked by pain and the struggle as he tried his best to complete his assignments in this condition. He offered his life and all he suffered in atonement for a schism that was taking thousands from the Roman Catholic Church in the Czech Republic and especially for a particular priest active in the Schism.

At the age of 27, Fr James Kern was deathly sick. One day a nurse seeing his condition said “ ‘You poor, poor martyr!’ He replied with great earnestness, ‘I’m not poor. Don’t you know that in every age God always needs some people to do the work and others to suffer? If the Savior appointed me to suffer, then I am ready to do it as long as it is His will.’

With tears in his eyes, he told a friend who was trying to comfort him: “this is happening only because God’s love permits it and because I love Him so much.”

But on the eve of his death he had the quiet confidence of one who had “run the race”. Looking forward to Our Lady’s promise that those who are faithful to her rosary will see her face and be comforted by her at their death he said, “tomorrow at this time I will see the Blessed Mother and my Guardian Angel.”