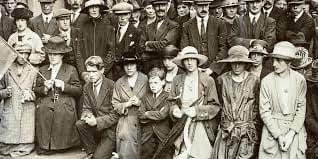 The “Irish Rebellion of 1641” began 380 years ago today. The uprising against suppression of Catholics initially freed many towns in Ulster.

Because of acrimony between King Charles and Parliament it took until the next year before an army arrived to quell the rebellion. The rebellion had spread quickly to other parts of Ireland, gathering unarmed and untrained but ardent men who were in military terms no match for the professional soldiers who arrived.

However the army met a force it didn’t expect nor could it defeat….the rosary.

These “soldiers” all carried their beads and used them. They were also reinforced by the rosaries prayed in every cottage and castle in the land. The rebellion now called the Irish Catholic Confederacy.

It took the British ten years to suppress the rebellion. And this was only made possible by the two years of extreme brutality of Oliver Cromwell, and widespread martyrdom, and even he found that the one thing he could not defeat was the rosary and the faith it signified.

He famously wrote back to England:

“All is not well with Ireland yet. You gave us the money, you gave us the guns. But let me tell you that every house in Ireland is a house of prayer, and when I bring these fanatical Irish before the muzzles of my guns, they hold up in their hands a string of beads, and they never surrender.” (Oliver Cromwell 1649)