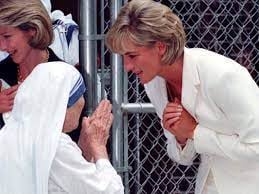 “Upon hearing of Lady Di’s death, Mother Teresa sent her condolences, saying of Diana: “She was very concerned for the poor. She was very anxious to do something for them, and it was beautiful. That is why she was close to me.”The nun died a few days later, on September 5, 1997. The two women had seen each other just months before…, Diana and Mother Teresa “walked hand-in-hand through the streets of New York’s Bronx … They hugged, kissed, and prayed together during the 40-minute visit and Mother Teresa blessed the princess.”…when Diana’s butler, learned of her tragic death …he was asked to bring items dear to her to the..hospital in Paris, where the princess had been taken. Devastated, he went to her apartment…at the Princess’s desk …and picked up a set of rosary beads given to the Princess by Mother Teresa, which was draped over a small statue of the Virgin Mary, and put them in his pocket.Arriving at the hospital… Diana’s driver, who gave the precious rosary to the nurse. He asked her to place it in the hands of the princess. A photo of her two sons, which she kept in her handbag, would also be placed in her coffin.We do not know whether Mother Teresa knew that the rosary she had given to Lady Di accompanied her to her final resting place. We hope and pray that the Blessed Mother, and not just the rosary, was near the royal during and after her tragic death, helping her obtain the graces she needed to be welcomed in due time into the Kingdom of Heaven, with her saintly friend.” (Mathilde De Robien –Ateleia.org)