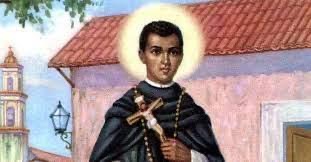 Today is the feast of St Martin de Porres.

St Martin had a great devotion to the rosary which he prayed throughout his youth. Becoming a Dominican, he was girded with the rosary from the time he entered the Holy Rosary Priory in Lima, Peru as a novice. Many rosary miracles were related by witnesses testifying in the process that eventually led to his canonisation.

For example, one beautiful day Martin took the convent novices on an outing. As they left the city and walked through the beautiful countryside beyond, Martin praised God and spoke of the wonder of His goodness. He pointed out His reflection in all that He created about them. The hours passed quickly, unnoticed by the little group. Suddenly they heard the bell in a nearby village.

They must be back at the convent in fifteen minute for evening prayer but they were hours away! Panicking they turned to Brother Martin, who turned to Our Lady.

“Let’s pray the Rosary.” So retracing their steps they began. At the end of the Salve they were entering the convent chapel as evening prayers were about to begin.