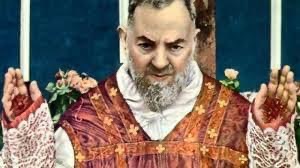 Padre Pio came from a poor family. When he told his parents of his vocation, they knew he would have to get an education but that took money something they didn’t have. To earn the money, Padre Pio’s father went to America, worked hard sending every penny he could home.When his education was complete, Padre Pio’s father returned to his family and lived out his years devoutly.

When his father died, Padre Pio prayed many rosaries and fasted for his soul. As the months went by and he kept up the intensity of his prayers for his father, his brother friars wondered. One day they asked, surely his devout father was now in heaven. Padre Pio told them that thankfully he was, but he was there because of the prayers offered for him so far and into the future.

Too often we canonise the deceased at their funeral forgetting to stress the importance of praying for their souls. We risk leaving them to languish in Purgatory.

St. Pio, it is believed, prayed many many rosaries a day.

“The holy souls are eager for the prayers of the faithful, which can gain indulgences for them. Their intercession is powerful. Pray unceasingly. We must empty Purgatory.”