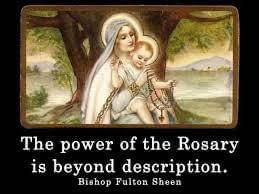 Today’s feast of Our Lady of the Portuguese commemorates a rosary miracle. In 1535, Portugal built a fortress on the island of Diu in the East Indies. The stronghold was to protect Portuguese trade with the far East and prepare the way for missionary activity.

However three years later it was besieged by the Ottoman fleet of 72 ships with an army of 20,000. The fort was defended by about 400 men. There were many battles in the 7 month siege.

With only 40 starving Portuguese left, the Turks prepared to take the fort on 11th November.

The Portuguese, bereft of any strength to defend themselves, finally turned in complete trust to Mary. Setting aside the last of their broken weapons they picked up “the great weapon”, the Holy Rosary.

Our Lady in answer appeared to the Turks on the walls. She was a majestic yet Motherly presence. In great confusion the Ottoman forces, who were poised to attack, instead ran back to their ships and the Fleet sped away.