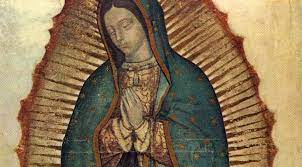 Another Reason to pray and promote the Rosary

She gave birth to the Savior of the world, and because she was so closely united to Jesus in his life and death, she was also given the privilege of sharing in Christ’s triumph over Satan.

In this, she becomes an example to all Christians, reminding us that we are to crush the ancient serpent under our feet.

This becomes quite clear in the image of Our Lady of Guadalupe, which shows Mary wearing a beautiful mantle; the stars in the pattern the same as the constellations in the sky when she appeared to Saint Juan Diego in 1531.

Although her mantle is turquoise (a sign of royalty), she looks downward in humility, with her hands folded in prayer above a dark ribbon around her waist (a symbol of pregnancy), as she stands atop a crescent moon (a reference to Revelation 12:1).

What most people fail to notice is the head of the serpent at Mary’s feet among the folds of her dress.

Although we say “Guadalupe,” the word Saint Juan Diego used in describing Mary was “Coatlaxopeuh” which means “she who crushes the serpent.”