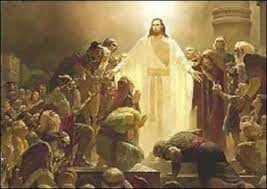 We continue our journey through the magnificent sixth chapter of St John’s Gospel at Mass today. In the lead up to today’s Gospel Jesus has just informed His followers that they must eat His flesh and drink His blood to have life (supernatural life) within them, and to be raised up on the last day. We are told that after hearing this many of His followers found what He was saying to be “intolerable.” Their main concern is that in the Book of Leviticus Chapter 17, the Law of Moses prohibited people from drinking blood. To hear someone like Jesus publicly speaking like this shocked them, and they found it hard to take. Is Jesus overturning the Law of Moses? Jesus, as He often does, responds in a most mysterious way, which may have baffled them even more. He says: “Does this upset you? What if you should see the Son of Man ascend to where he was before?” In other words He is telling them that He will ascend into Heaven, where He came from, or that He is Divine, and not human as they seem Him. He is also telling them that it will not be a dead man’s flesh that they will be eating. He expands further: “‘It is the spirit that gives life, the flesh has nothing to offer. The words I have spoken to you are spirit and they are life.” In other words it is the Holy Spirit which will raise up His dead body in the Resurrection. It will be His resurrected body that we will all consume.Do you remember when Jesus appeared occasionally to His disciples after the Resurrection? He was able to walk between walls, appear and disappear etc. He was no longer bound by time and space. In the same way He can now be present on all the altars of the world. We are also told that “many” left Jesus at this point. Peter speaks up. He recognizes Jesus’ divinity and whilst Peter may not comprehend everything that Jesus is saying, he sees Jesus has “the message of eternal life”, and Peter believes that Jesus is “the Holy One of God.”Joshua asks the people in our First Reading if they, like his family, will follow God and trust Him. They say they will. Today’s readings ask us the same question. Are we willing to follow the LORD even though we may not understand His ways, or what’s going on at a particular time?In my life as a priest, some of the people I have been most inspired by are those who have gone through tremendous heart ache and suffering and still put their trust completely in the good LORD. I have asked myself if my faith was that deep. How I would have done in their position. They have kept their eyes on Jesus, because like Peter, they know He is the Holy One of God and that He alone has the message of eternal life. Please God, we will do the same.