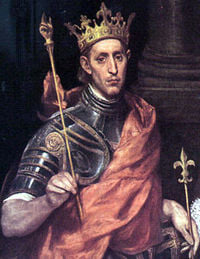 In the Church we celebrate saints from all different walks of life, shapes and sizes, different times, countries etc. Today the Church holds up the holy life of King Louis IX as a model of sanctity. St Louis became King of France at the age of 12. He later married and had 11 children. He was noted for his great love for the poor, his fervent prayer life, and for living a life of penance. Like a good father, he wanted what was best for his people, so he tried to give his people peace, economic stability, and to look after their spiritual wellbeing. His fellow rulers in Europe saw him as a good and honest man, and often called on him to act as arbitrator in a dispute. He undertook two unsuccessful crusades to liberate Christ’s burial place, and he died on the way back from the second one in Carthage (Tunisia). St Paul in our First Reading today reminds us of St Louis. He, also a good father, is writing to his spiritual children in Thessalonica. He reminds them that he treated every one of them “as a father treats his children, teaching you what was right, encouraging you and appealing to you to live a life worthy of God, who is calling you to share the glory of his kingdom. “May the holy life of St Louis inspire in us a love for the poor, more fervent prayer and penance.