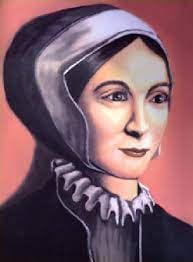 We honour three mighty English women today whose love for the Mass and the priesthood was so great that it cost them their lives. Margaret Clitherow was martyred in 1586. She converted to Catholicism. Her husband, although he remained a protestant, allowed her to hide priests in the house. She was eventually caught, and laid on sharp stones and crushed to death. St Anne Line died in 1601. She also converted to Catholicism in her teens and was disinherited by her family. She kept a house for priests. One day a large crowd was seen coming to her house for Mass and she was arrested and hanged in Tyburn.St Margaret Ward died in 1588. She was arrested after helping a priest escape from prison. She was tortured savagely but she never gave up the priest’s hiding place, nor did she renounce her Catholic Faith. She was executed on 30th August, 1588.These great women believed Jesus was the one the Prophet Isaiah spoke about, as highlighted in our Gospel today: the one who came to bring good news to the poor, to proclaim liberty to captives, to set the downtrodden free, and to give the blind new sight.They were not afraid to die because as St Paul says in our First Reading today: “we believe that Jesus died and rose again, and that it will be the same for those who have died in Jesus: God will bring them with him.”Be not afraid dear friends, no sorrow or pain in this life can compare to the glory that awaits us. May Ss Margaret, Anne, and Margaret intercede for us and help us to have faith and courage like them.

Today’s readings are available at: https://www.catholicireland.net/readings/