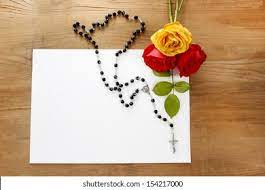 A beautiful story ….a Brother (who was not a priest) of the Dominican Order, could not read or write, so he could not read the Psalms, as was the custom in the convents of the time. Then, when he finished his work at night (he was the doorman, the sweeper, the gardener, etc.) he would go to the convent chapel and kneel in front of the image of the Virgin Mary, and recite 150 Hail Marys (the number of the Psalms), and then retire to his cell to sleep. In the morning, at dawn, he got up before all his brothers and went to the chapel to repeat his custom of greeting the Virgin.Brother Superior noticed that every day when he came to the chapel to celebrate the morning prayers with all the monks, there was an exquisite smell of freshly cut roses and it made him curious, so he asked everyone who was in charge of adorn the altar of the Virgin so beautifully, to which the answer was that none did, and the rose bushes in the garden were not lacking in their flowers.The brother became seriously ill; The other monks noticed that the altar of the Virgin did not have the usual roses, and they deduced that it was he who put the roses. But how? No one had ever seen him leave the convent, nor did they know that he bought the beautiful roses. One morning they were surprised that he had gotten up, but they could not find him anywhere. At last they met in the chapel, and each monk who entered was amazed, for Brother Lego was kneeling in front of the image of the Virgin, ecstatic reciting his Hail Marys, and each one who addressed the Lady, a rose appeared in the vases. Thus at the end of his 150 greetings, he fell dead at the feet of the Virgin. (Shared by the Ministry of Intercession and Prayer for the sick Sons of MARY)