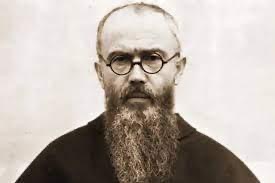 Today we would normally celebrate the feast of St Maximillan Kolbe.

He is of course one of the giants of the Rosary and Marian Consecration which he promoted throughout Poland through his publication, Knight of the Immaculate, and his campaign, Militia Immaculata.

His work prepared the Polish people to meet the trials of Nazi and Soviet occupation. Lead by Providence, St Maximillan also brought this preparation to Nagasaki Japan shortly before WWII.

On the fourth anniversary of St Maximillan’s martyrdom in Auschwitz, the Japanese Empereor, following the bombing of Nagasaki, agreed terms of surrender. The surrender was official on the following day the feast of the Assumption of Our Lady.

St Maximillan Kolbe explains why we must turn to Our Lady and pray her Rosary to defeat evil in our lives but also evil in the world.

“The Immaculate alone has from God the promise of victory over Satan. She seeks souls that will consecrate themselves entirely to her, that will become in her hands forceful instruments for the defeat of Satan and the spread of God’s kingdom.”

”The conflict with Hell cannot be maintained by men, even the most clever. The Immaculata alone has from God the promise of victory over Satan.”