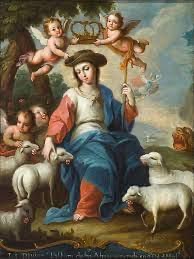 Today is the Feast of Mary, the Divine Shepherdess.

In 1703 Mary was given the title Divine Shepherdess, bestowed upon her by Father Isidore of Spain after a vision in which the Blessed Mother appeared to him as a shepherdess.

Father Isidore … erected small shrines to Our Lady along the roadways. They taught the people how to sing the rosary walking along the street. This custom Father Isadore brought with him on returning to Seville. In such a worldly atmosphere this came as a surprise to the people. Cantina and tavern loungers found themselves sliding out of the taverns and joining him, to become part of the sheepfold of Mary.

During one of these rosary procession street tours Christ’s words, ‘I am the Good Shepherd” flashed across the Father’s mind. That night he had a vision of the Blessed Virgin. She appeared as a young shepherdess with a crook in her hand and a large straw hat falling over her shoulders….

“Our Lady,” he said, sat on a rock under a tree. Her face radiated divine and tender love. Over a red tunic she wore a jacket of white sheepskin such as shepherds wore; from her shoulders hung a blue mantle. A large straw hat, held by a ribbon, dangled over her left shoulder.

Near her right hand was a shepherd’s crook, symbolic of the love and care she gives her children. In her left hand she held a rose, while the right hand rested on the head of a lamb, which had sought shelter in her lap. The flock of sheep which surrounded her carried in their mouths – the Virgin’s Flower.

P.S. The Coastal Rosary for LIFE & FAITH in Ireland is on Sunday October 9th at 2.30pm. Sign up a location at www.coastalrosaryireland.ie