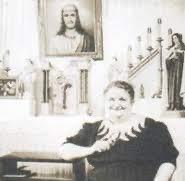 Rhoda Wise was born into a Protestant family, 22 Feburary 1888.

When she was 50 years old she had to spend a long time in hospital. She relates “I, a Protestant, became interested in the Rosary and had one of the Sisters teach me how to say it.

Soon after, I learned about St. Therese, the Little Flower of Jesus, and became greatly devoted to her, making one novena after another to her.

I then felt myself drawn to the Catholic Church and after being instructed by Monsignor Habig, the pastor of St. Peter’s Church, I was received into the church by him on January 1st, 1939.”

Rhoda was confirmed by the bishop in her hospital bed. After months, Rhoda was declared incurable and sent home in great pain to die. Her lifeline in all these trials was the rosary.

At home Rhoda had a vision of Jesus who told her he would return at the end of the month. When Jesus returned, He was accompanied by the Little Flower. Rhoda was healed, and was able to attend Mass for the first time in her life.

For the next ten years until her death, Rhoda was faithful to her mission of prayer, evangelisation and healing. One of the people who came for healing and was healed after praying a novena with Rhoda was Rita Rizzo, the future Mother Angelica, the foundress of EWTN.

In Jesus’s last alleged visitation just before her death, Rhoda says that Jesus told her, “Tell the people not nearly enough of them are saying the daily Rosary; they must say the Rosary for the conversion of Russia…” At this time Jesus showed her His Sacred Heart, His bleeding heart.”