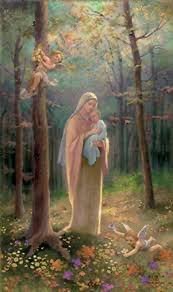 “In 1380 there lived near Lesneven (Brittany) a good old man named Solomon. He had no one to care for him, lived alone, and did not associate with any person; he walked with his eyes to the ground, but his heart in Heaven.

He was a simple man of the woods, and he slept in the open under an oak tree near a fountain.

Solomon loved to swing from the branches of a tree that hung over the fountain, all the while singing his praises to “Ave Maria!” at the top of his lungs. He begged for bread each day to obtain his meals, and in doing so he was often laughed at, jeered at and otherwise mistreated by the small boys. He was commonly known to one and all as “The Fool of the Wood.”

As the years went by, old and crippled as he was, he might be seen every evening hobbling toward the chapel of the Blessed Virgin where he spent most of the night in prayer after the villagers had returned to the warmth and security of their own homes. One day, while the villagers were on their way to the chapel, they found the old man in the snow dying of exposure. They tried to help him, but it was too late for their kindness, as the old man soon died with the words “Ave Maria” on his lips. The fool of the wood had finally gone to his Queen in Heaven. Legend further relates that he was buried in an out-of-the-way place in Lesneven, for he had no family to mourn him.

When spring came, a snow-white lily rose from the outcast’s grave, and on the delicate petals of the lily, in letters of gold, the words “Ave Maria!” could be seen. The grave was opened, and it was soon discovered that the lily had taken root in the mouth of the penniless old hermit. News of the miracle drew crowds to the scene, and a church was built to honor Our Lady of the Forest whose feast is today. “(Woman in Orbit)