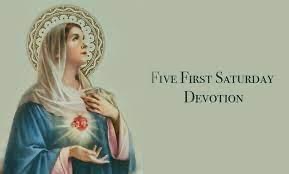 Jesus explained the five great sins committed against Our Lady’s Immaculate Heart to Sr. Lucia on May 29-30, 1930, saying:

“There are five kinds of offences and blasphemies spoken against the Immaculate Heart of Mary.

First: blasphemies against the Immaculate Conception

Second: against her Virginity

Third: against the Divine Maternity, refusing, at the same time, to receive her as the Mother of mankind

Fourth: those who seek publicly to implant, in the hearts of children, indifference, disrespect, and even hate for this Immaculate Mother

Fifth: those who revile her directly in her sacred images

Here, dear daughter, is the motive that led the Immaculate Heart of Mary to petition Me to ask for this small act of reparation (The First Saturdays). And, out of regard for her, to move My mercy to pardon those souls who have had the misfortune to offend her. As for you, seek endlessly, with your prayers and sacrifices, to move Me to mercy in regard to these poor souls.”