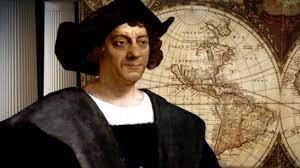 The first port of call for Christopher Columbus and his three ships the Santa Maria de la Immaculada Concepcion, the Santa Clara (Nina) and the Pinta was to the shrine of Our Lady of Gaudalupe in Spain to ask a blessing on the venture.After 33 days at sea, on October 12, 1492, the feast of the patroness of Spain, Our Lady of the Pilar, Christopher Columbus on board the Santa Maria de la Inmaculada Concepción, reached the New World. The night before “As the sun set, the Salve Regina hymn rang out across the Atlantic. Ninety men stood on the decks of three boats, led in prayer by Christopher Columbus, the foreign captain they had come to trust. They had kept the same ritual of evening prayers since they left Spain months ago, but tonight was different. Tomorrow would be the Feast of Our Lady of the Pillar, Spain’s great patroness. Columbus had promised his men that had they not spotted land by her feast day, he would order the ships to turn back, a promise he intended to keep. He knew Our Lady would not abandon the enterprise he had worked so hard to bring about. The signs that they were near land were increasing by the day.As Columbus climbed the steps to his cabin, his gaze fell instinctively to the western horizon. Off in the distance, he caught sight of a light, like a candle rising and falling on the waves. Quickly, he called another man, who confirmed the sighting. The crews on all three ships were alerted, each man was on deck, peering out for signs of land nearby. At 2 a.m., the cry came out, “Tierra!” Land! The excitement of the crew was such that they hardly noticed the many hours it took to navigate the treacherous reef that surrounded their new destination. As Columbus knelt on the beach to give thanks, the following prayer rose from his lips:“O Lord, eternal and omnipotent God, Thou hast, by Thy holy word, created the heavens, the earth, and the sea; blessed and glorified be Thy name; praised be Thy majesty, who hast deigned that, by means of Thy unworthy servant, Thy sacred name should be acknowledged and made known in this new quarter of the world.”The above prayer, recited in Latin and the first spoken in the Americas, was followed by the chanting of the Credo, the Te Deum, and many other prayers in thanksgiving. As the banners were unfurled, the admiral solemnly proclaimed, “In the name of Our Lord Jesus Christ…” He proceeded to claim the new land for his sovereigns, but not before first claiming it for his Divine Master, giving it the name San Salvador (Holy Savior).” (Ben Broussard)P.S. If you missed any of the talks at the Hail Holy Queen Conference on Saturday, you can listen back here – https://www.radiomaria.ie/hail-holy-queen-conference-2021/