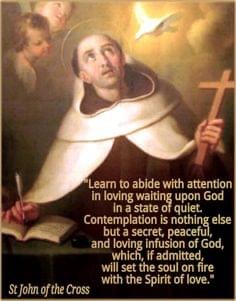 St John of the Cross today’s saint is known as a great theologian and mystic. Although his writings have little explicitly stated about Our Lady. We know from his life that he was deeply Marian.

“It is in the life of the Saint that we find substantial proof of the centrality of Mary in his mind and heart. As a young boy, John was playing near a lagoon when he fell into the water and began to drown. He would recall that a beautiful lady, whom he later identified as Our Lady, came to his aid. Several years later, John fell into a deep well but was pulled out without injury. This miracle, too, he would attribute to the Blessed Virgin Mary. John’s early biographers also affirm that his decision to enter the Carmelites was largely influenced by the Marian character of the Order and his great love for Our Lady. When he planned to leave the Order to join the Carthusians, St. Teresa of Avila is said to have convinced him to stay and become the co-founder of her reform by appealing to Mary’s special patronage over the Carmelites. John was also known to attribute his miraculous escape from prison to the strength given to him from the Mother of God. Br. Martin of the Assumption, a regular traveling companion of St. John of the Cross, testified following John’s death: “He was so devoted to Our Lady that every day he prayed the Office of Our Lady on his knees.” And Martin added that, during their many journeys together, John would sing hymns to Our Lady. Finally, at the hour of his death, upon hearing the bell for Matins, John of the Cross said, “And I, too, through the goodness of the Lord, will have to say them with our Lady in heaven.”

And this is what those who are faithful to the daily rosary should aspire to, that they like St John of the Cross, in their last moments can whisper, “And I, too, through the goodness of the Lord, will have to say them with our Lady in heaven.”