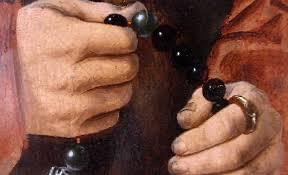 When praying the rosary we sometimes picture the scene and the people in the scene suggested by the decade.

St John, the Beloved Disciple whose feast is today has the unique distinction among the apostles of being part of 15 of the 20 rosary scenes.

The Baptism of Our Lord, John and Andrew follow Jesus when St John the Baptist calls out “Behold the Lamb of God”

The Wedding of Cana, John followed Jesus by the Jordan River, so it is likely he was one of the disciples who witnessed the miracle of water changing to wine.

Proclamation of the Kingdom, John an apostle was present as Jesus proclaimed His Kingdom by Words and Signs.

Transfiguration, John was one of the three apostles who witnessed Jesus’ glory.

The Institution of the Eucharist, John sat next to Jesus at the last Supper and rested his head on Jesus’ heart.

The Agony in the Garden, John was one of the three apostles who Jesus brought into the Garden to pray, John feel asleep.

The Scourging at the Pillar and Crowning with Thorns, though John ran from the Garden he ran to Mary.

We know he was at the High priest’s courtyard so he must have been at least in Pontius Pilate’s courtyard while Jesus was being scourged and when He was brought out to the crowd beaten and bloody, crowned with Thorns “Ecce Homo”

The Carrying of the Cross, John was with Mary and so he would have met Jesus on the Via Crucis.

The Crucifixion, John was the only apostle who stood with Mary beneath the Cross of Jesus.

The Resurrection, John was the first apostle to reach the tomb, though he let Peter enter first.

The Ascension, John was present with the apostles and disciples at the Ascension.

The Assumption, John took Mary into his home, so it was he that laid her to rest in her dormition and with the other apostles found that she had been taken to Heaven after three days.

The Coronation, John as an old man on Patmos, saw Our Lady, the new Ark of the Covenant, the Queen of Heaven in the vision that he recorded in the Book of Revelation

St John help us to be present to all the events of the rosary.